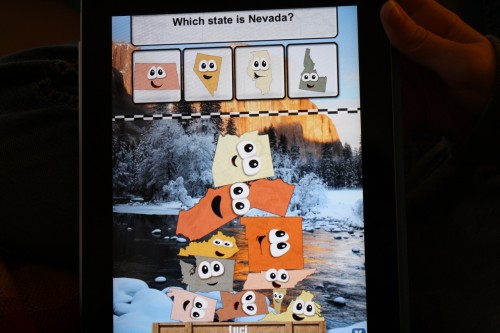 The iPad has become a teaching tool. Educational apps abound, with an amazing variety of subjects available. In the geography category, we have Stack the States by Dan Russell-Pinson.

Stack the States is both fun and educational; a game that uses some of the best mobile features – interaction and manipulation. While learning about the 50 states by answering questions about them, this app requires critical thinking skills as well. Your brainpower is tested in your ability to stack your states successfully.

The object of the game is to create a stack of states. You are asked various questions about the 50 states including:

If you choose the correct state, you get to actually pick it up, move it, rotate it and place it wherever you want. Your goal is to carefully create a stack of states that reaches the checkered line. 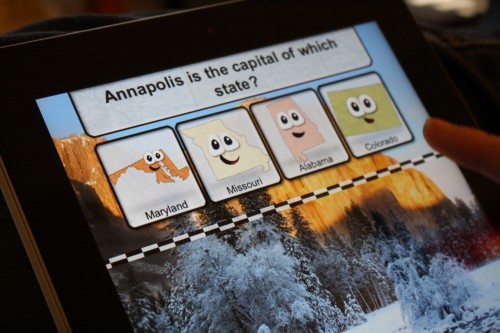 The laws of gravity and physics apply to the stack of states. You could get three large states that are easily stackable and reach the checkered line right off the bat. Or, perhaps you will get a slew of smaller states that don’t stack easily and fall down, collapsing the tower. They might even bounce off the platform completely!

Because all the states are scaled to size, students begin to recognize the various shapes and sizes of each state as they build configurations by moving, rotating, and placing each state in a stack. 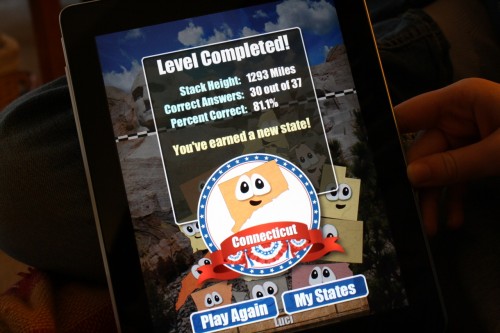 Successfully completing a stack level earns you a random state. While trying to collect all 50 states, you can check your progress on a personalized map of the US. As you earn states, you can unlock the three included bonus games: Pile Up, Puzzler and Capital Drop.

You can purchase Stack the States app in the iTunes store for .99 and the app is available in the following platforms: 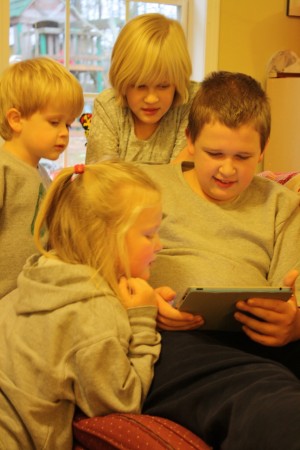 Stack the States is a well thought out game that our children have trouble putting down.  I never thought I’d hear myself say, “Put away your geography work and go to bed.”

~Steve keeps busy with five children and a job in information security. He has a second job as principal of the Hodgepodge homeschool and also writes for Habits for a Happy Home and Passionate Purposeful Parenting.

Steve keeps busy with five children and a job in information security. He also has a second job as principal of the Hodgepodge homeschool.

Book Review ~ A Necklace for Jiggsy by Kit Grady
For Instruction in Righteousness, Pam Forster