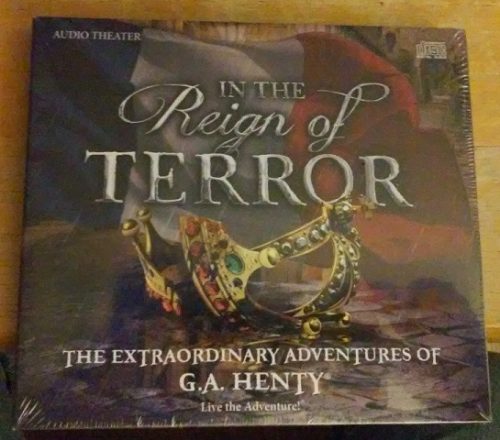 Our family had the privilege of reviewing Heirloom Audio Productions newest release “The Reign of Terror“. Our family has listened to almost all of these audio books and we absolutely LOVE them! Honestly, history can be a little difficult to teach in a way that is exciting and fun – but NOT with Heirloom Audio dramas! These bring history to life like nothing before! These aren’t books that are read to the listener – they are stories brought to life with voices, sounds, music – LIFE!

So, who is Heirloom Audio Productions? They are Christians wanting to bring history alive for people to enjoy as it would have been when it originally happened … they put a lot of detective work in to their productions to make sure they are as accurate as possible. Sounds wonderful, right!?!? And, most importantly, they keep God in the stories! (Something that seems to be happening less and less these days.)

So, specifically about THIS production: It is about a young Englishman who moves to France to teach a Noble French family English. This happens right before and into the French Revolution. It brings to light the differences between the American Revolution and the French Revolution. The American Revolution sought justice and used war as the final resort while the French Revolution on the surface seemed good (by wanting equality for everyone) – it was actually used as more of an excuse to murder without due process. Basically it was used as a way to “get even with people” – for vengeance. Many people lost their lives that should not have. This is the background for the story of this young English man. The escape he has with several family members of those he stayed with. They continue to explore the French Revolution on their journey and much is shared, most importantly the faith of this Noble family of the young Englishman. A major thing to glean from this is a warning that when people are “worked up” they don’t always want to hear reason about how to do things. This production isn’t a lot of “battle action” like in several of the previous productions – there is a lot of discussion about how while the common folk were right in the fact that they had been mistreated – but their response was not thought out. And those leading them used that anger to get in power and to get their revenge. Overall, we LOVED it!

If you are interested in what a couple of our other authors had to say about Heirloom Audio Production, you can look at:

In Freedom’s Cause by Heirloom Audio Productions

All in all, we LOVE these productions – they are an EXCELLENT and enjoyable way to teach History.

Here’s praying you have fun learning!

Dawn is a woman of God who is married to the love of her life. She works part-time, homeschools their two boys (since 2008) and loves animals. She enjoys learning what the Lord will provide for each day. You can find her over at Guiding Light Homeschool.