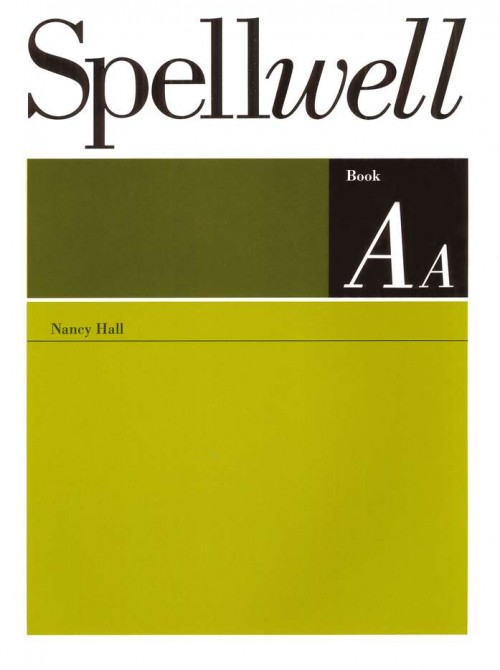 I’ve always been avidly against spelling as a subject all on it’s own, and this worked well for one of my children. Unfortunately the other suffers from poor spelling. It’s been a struggle for him, and thus for me.

I decided this was the year that we’d add spelling, officially, to our daily routine. The problem was, that I didn’t want to have random lists of words that confused the poor child even more.

You see, he can spell phonetically, but outside of that realm he’s lost. Thus he spells: frum, wut, luv, sav. Oh, to be able to read his sweet little notes without the need for a red pen to scribble all over it.

I wanted something that stuck with the basic rule of: keeping phonetically spelled words together. This is down the Charlotte Mason line of thinking, and it made perfect sense, especially for a child who is struggling so much.

After searching through many spelling programs I stumbled upon one called Spellwell. I was intrigued because I’d never heard of it before. The lists of words were not huge, and they happened to have a pattern about them!

I decided to give it a try, and ordered the second book in the series called Aa. That’s right, the series doesn’t have grades on them but alphabetical numbers. This works wonderfully well when you have a  student in one grade for most subjects but feel the need to back them up significantly for others.

Each week a child starts with a pretest. Now, that goes against the Charlotte Mason idea of spelling, but I actually like this. It gives us a baseline, a jumping point. It allows me to know if it’s worth doing the lesson or not.

When we pulled the book out the first day, I was convinced my child would ace that test. He didn’t. I nearly cried. In the weeks since then, however, he’s gotten progressively better with each pretest, and was so excited to find himself using bonus words one week! 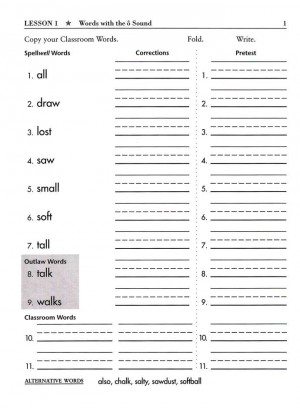 The spelling lists are roughly 7-10 words long in the Aa book that we are using. If a child can master all of those words you give them the Bonus Words. Each list has words that follow the same phonetical spellling rule. Er, ea, silent e, ice, etc.

This works really well and builds confidence quickly for my poor speller. If he remembers his phonics rules he can quickly master his lists because he remembers they all have something in common! This is just  so perfect for his confidence! 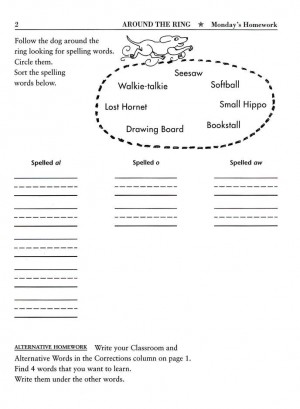 There is one page of work to be done Monday – Thursday in Spellwell. Each page is very simplistic. It might be a fill in the blank story, rhyming fun, compound word practice, games or any one of a few things.

The books are in black and white, but there are sketches through out on most pages that the children are encouraged to color in if they want. My student skips this particular activity.

There is no work on Friday as this is saved for Post Test Day. There is no place within the small workbook for a child to take the test, so we generally do so on the whiteboard, or if the weather is really nice out on the driveway with sidewalk chalk.

My top notch answer is going to be simple. I love that my child has gained confidence and power with his spelling. He’s gone from worrying that everything he spells will be wrong to asking occasionally. His spelling is not perfect, but it’s vastly better!

I love that the spelling words are applied each day in fun and engaging ways! So much so that my student who doesn’t truly need spelling help {yet} has asked if he could also do these books! 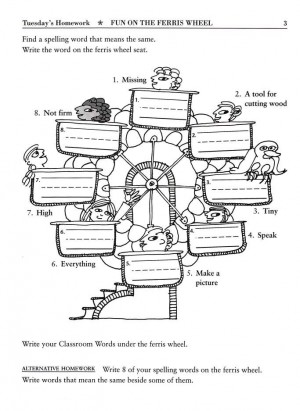 I love that the lists are short, simple, and the words on them all have something in common with each other! This was really important to me.

I especially love that this programme is extremely inexpensive. It’s presumed that in a typical school year {180 days} a child would go through two workbooks {Normally A & Aa or B & Bb, etc.} Workbooks & answer keys can be purchased through CBD or Book Depository.

I do not own a Teacher’s Manual for these workbooks. I didn’t feel a need for one, but if you wanted to purchase one they are a few dollars less then the Student books. You’ll also find that both letters {A & Aa or B & Bb, etc.} are all in one Teacher’s Manual!

Oh, and for those of you, like us, who did not use Explore the Code, the author of SpellWell happens to be one in the same! I found that information neat for some odd reason!

Honestly, so far I’ve only had one qualm with this book. In one lesson there was a fill in the blank story about a Teddy Bear. In an effort to fit in a spelling word of “wear” the author used the sentence: “He is truly wash-and-________. Despite the answer being a rhyme with the previous sentence my son was baffled. 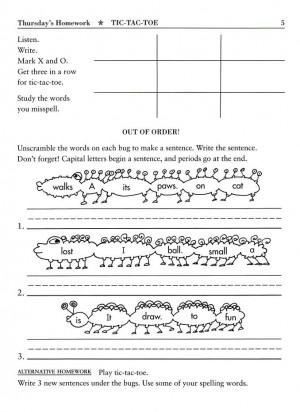 I thought they could have used a better sentence, but I have to admit I’ve tried to write fill in the blank sentences with rhyming words before and it can be tricky!!

We love this simple, inexpensive program.

Kendra lives in Tasmania Australia with her husband, the Man From Down Under, two curious boys, a dog, & a bird that constantly talks back. Creator, and avid user, of the Homeschool Book Of Days & The Nature Game she can be found retelling tales from The Land Down Under over at the Aussie Pumpkin Patch.