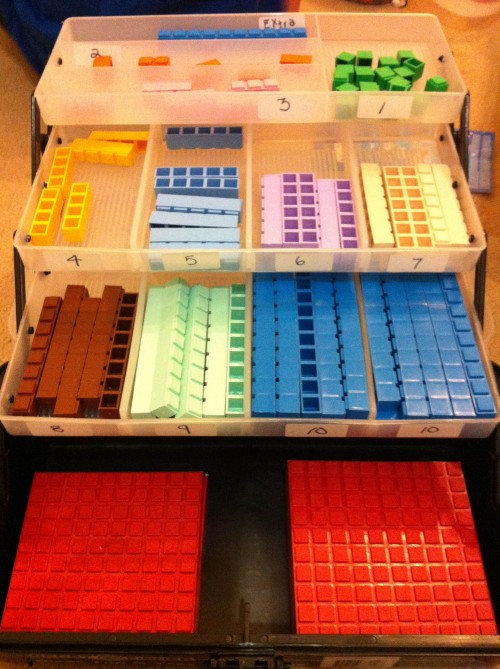 A few years ago my children weren’t using a math curriculum at all. That’s not to say we weren’t doing math, but that I wasn’t using a curriculum to accomplish the task. Instead everything we did was done through games, stories, and hands on applications. My children learned most of the basics and some of the deeper maths as well.

However, when our eldest hit 4th grade we decided it would be good to put him into a math curriculum. There were a few ideas behind that. We wanted to be sure he was at least at grade level, that I hadn’t created gaps. I wanted to be sure he could work through a math text, because if he goes to University he’s going to have to do that.

We tried out Teaching Textbooks which my boys enjoyed. However, my son’s ground in math meant we needed to bump him ahead at least one grade level, but even then it seemed as though he was moving pretty quickly through the math.

So the next year we used Saxon’s middle grade maths. My son loved it and did well with it. The only downside was, even changing how we chose to do the lessons, math was taking about an hour a day. This wasn’t from struggling or tears, but simply from the amount of work provided. I wasn’t totally okay with that because it often meant that something else might not get done in a day.

After chatting with some friends, lots of chatting, and praying we decided in the end to switch to Math U See which would still give our children a well rounded mathematical background, but could be accomplished in considerably less time.

When we left off with my eldest last year in Saxon he was using 6/5. He was thriving in it all though we took a month off when he hit long division so we could become comfortable with it. The month off meant that while it helped him become more comfortable with division, but it also left me feeling like I’d messed up a bit because he had more lessons unfinished in his Saxon book.

So when, after much research, discussion, and prayer, we decided to go with Math U See I gave my kids the placement tests. Interestingly enough you need to be aware that Math U See works on mastery.

In the past I’d always been against mastery thinking a child needed a spiral approach in order not to forget what he’d previously learned. However, the more I considered the mastery approach the more I realized that my child was being taught, without math curriculum, in exactly that way. We picked a topic & stuck with it until he knew how to do it fully. A math curriculum that taught in the same way would be awesome.

I think that it’s important to understand that because Math U See works on a mastery process their primary and pre-algebra books tackle one operation, or main mathematical theme, at a time. 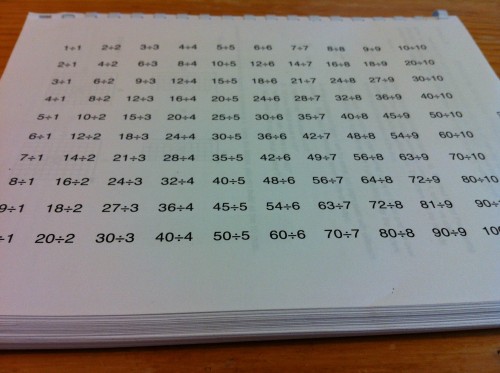 When my children took the pretests they slipped in exactly where I thought they would based on this thinking. In other words, while my eldest knew how to divide he hadn’t learned everything there was to know about division because Saxon teaches on a spiral approach. Therefore I needed to slip him into the division book knowing he’d race through at least half of it until he reached the point where he’d basically left off in Saxon the year prior.

My younger son, while having memorized nearly all his multiplication facts, needed to slip into the subtraction book because he hasn’t mastered borrowing yet. Again, he’d race through about 3/4 or more of the book and then pick up where he’d left off the year before as well.

The thing to remember with Math U See is that because it works from a mastery approach your child will have a very solid foundation in all forms of subtraction, division, addition, and multiplication before moving into other books. They simply tackle each operation and/or theme in one book at a time.

One of our main goals this year with our children has been guiding them to more independent learning. Helping them take control of the wheel, to a degree, in tackling their subjects. So once they understood how the Math U See {MUS} program worked I set them the task of putting on their math video each Monday morning. 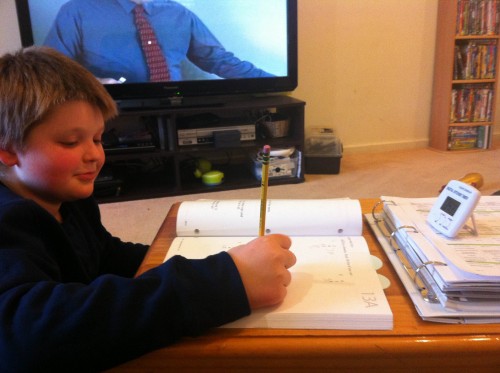 When I sat with them in the beginning I got them in the habit of answering the questions Mr Demme asks. I also have them pause the video to work things out with the MUS blocks if it’s a “new to them” type lesson. Before moving on to the next video they work on whatever worksheets I’ve assigned for that day. Generally on video day they only work on A sheets. There are sheets labeled A-F for each lesson. They repeat all of this for the next video I’ve assigned for the day.

On Tuesday-Friday they are generally assigned one page from each lesson that we are working on for the week. This may vary as to which pages though, based on the topic being covered for the week. When my son was reviewing all his multiplication facts, for instance, we didn’t fuss too much with the B and C pages.  Instead we used the A, D, E, and F pages as those have review of things formerly learned.

If we reach a lesson where I feel my child will need to slow down, we only do one lesson that week taking our time as we work through it. I encourage them to use the manipulative blocks for new concepts until they feel really confident with what they are doing.

If it’s a lesson I don’t feel my student has totally mastered, or I feel they aren’t as confident as they should be, I simply go to the MUS website and print out some worksheets from there for that particular lesson. This usually does the trick and we’re back to moving forward within a few days.

I love that this math program works on mastery. I know that sounds funny if you’ve read this all the way through, but it’s actually been a very wonderful thing for us and I only wish I’d been more open to the idea sooner! 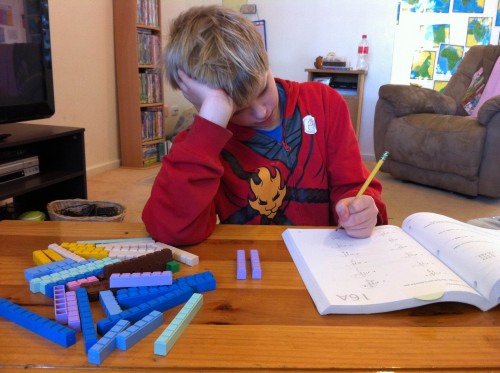 I love that I can go to the MUS website, for free, and print out extra worksheets if I need to. We have needed to a few times and it’s been a wonderful resource.

I love that the boys can do a “lecture” with the video. This is important as we continue to help move our children towards taking ownership of their education. It also gets them in the habit of learning from someone else which is a valuable lesson to learn.

I love that the books aren’t graded, but rather have Greek names. Regardless of age or grade a child can work at their own pace without feeling behind or worrying about a number on the outside of their workbook.

I love that the program uses manipulatives. I have a child who learns best by seeing and touching. This means when he has a small panic about math I often say, “You know they do call this math u see for a reason, let’s get out the blocks!”

I love that there are lessons and unit tests. Now, this is a minor thing, for sure, but I have a child who, like his mother, panics at the thought of a test. By throwing one at him from time to time with his math it allows him to get use to the concept and see that as long as he knows the information or has studied in preparation he’ll be fine.

I love that my kids can do fact family practice on the Math U See website for free as well. The program is built on children knowing their math facts – and knowing them well. While my boys have completely mastered some facts there are always a few that throw them for a loop. It’s very easy to just tell them to pick a set they are struggling with and “go for it.”

I’m going to be honest here and this will probably only matter & effect those of you living outside of the USA or more importantly living in Australia. However, MUS has changed their policy and will not ship products from the USA to Australia anymore. Their reasoning behind this policy is very simple. Maths Australia carries the products. The downside is that the products from Maths Australia do not compare in price or quality from the ones we can obtain in the USA. 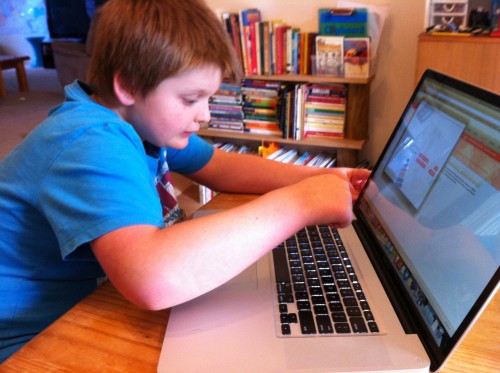 I also wish that their products were available from other mainstream locations such as Book Depository, CBD, or Amazon. For an overseas family that’s a huge help, although when we were capable of ordering their products from the USA we had no issues obtaining them from MUS directly.

The only other minor thing I can possibly mention is that I so wish I had a giant set of the blocks like Mr Demme uses on the video. I think I say this every time I sit in on the kids lessons. My kids say, “Moooooom!” Seriously, his extra large blocks are awesome!

Since entering back into the mainstream of math curriculum this is the first one that I’ve had no complaints about how things are taught or of the curriculum itself. I absolutely love the way this program works.

Find Math U See at their site. 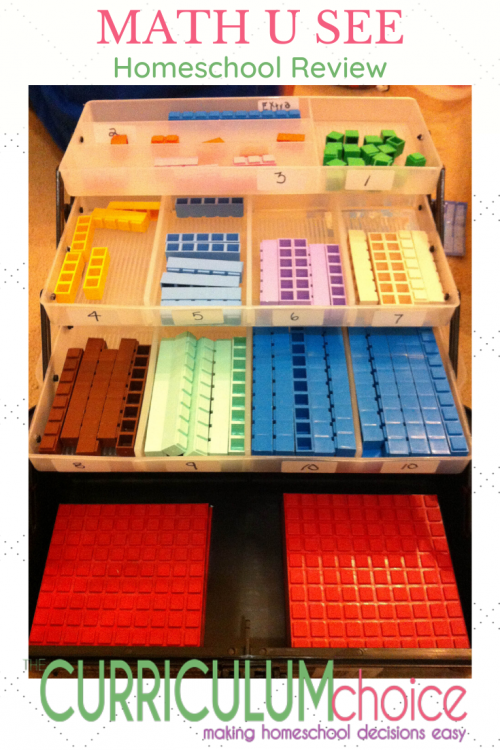