Last year I was in a real quandary about what to do for writing with my boys. I don’t know about you, but this is one subject I really struggle to find a good fit for. Some programmes are just too intense, others not intense enough. Morgan, our eldest, has used Cover Story previously from Clear Water Press (CWP), and he’d really enjoyed his time with it. I decided to look into a video writing program. 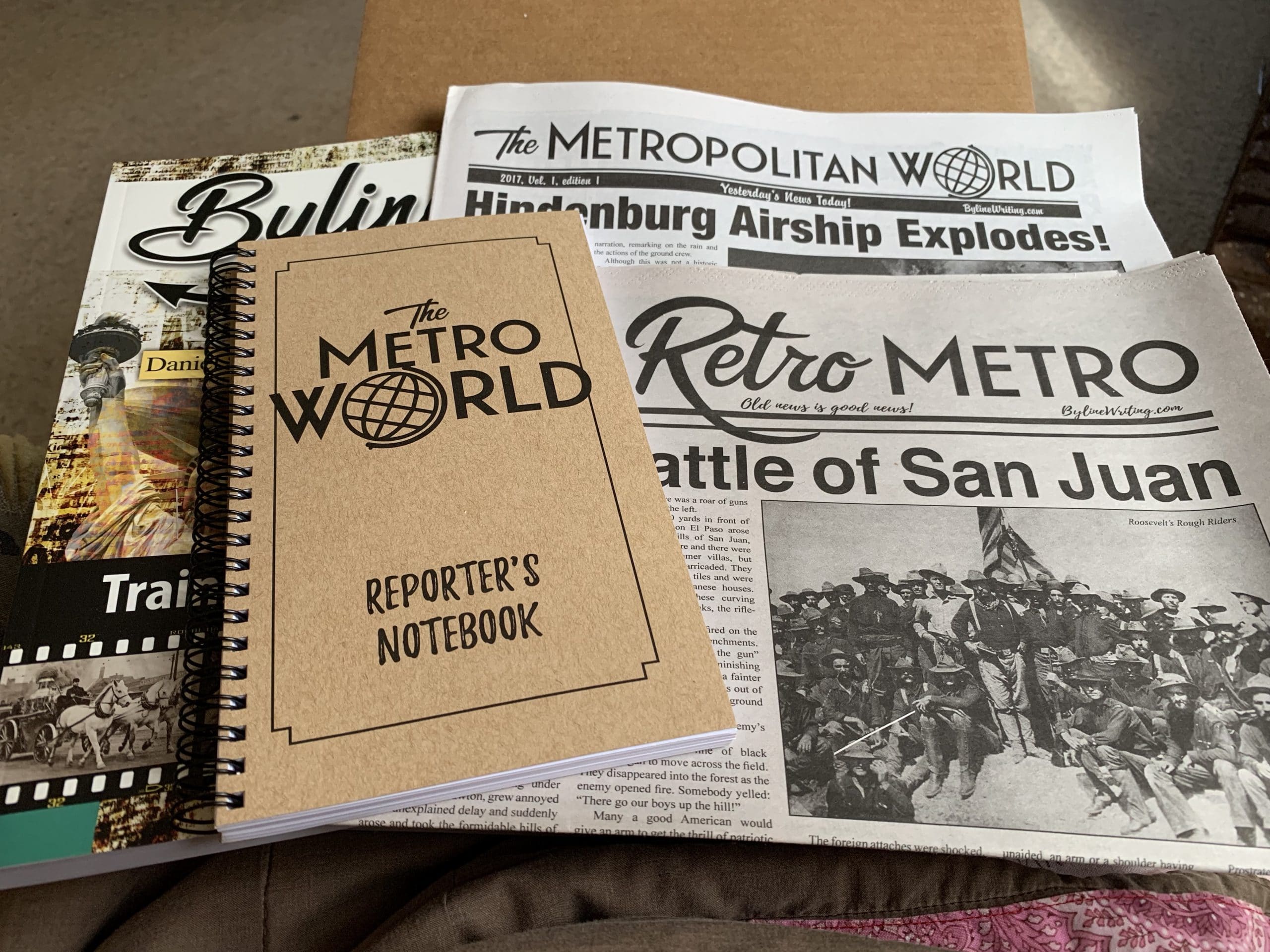 Instead of groans about one writing assignment or another, I often heard snorts of laughter coming from him while he’d watch Mr Schwabauer’s videos. He only ever had one complaint about that programme, and it was a lesson on adverbs, in which, if I recall correctly, the author stated that students might disagree with him and that was okay.

I decided to check out CWP again as I was debating their One Year Adventure Novel, and noticed they had Byline video writing program available. As Morgan is debating a career in writing post high school, I thought Byline would be a great way for him to get the feel for journalism. We’d discussed that there are many career paths for writing, and while I think his heart is more set on fictional story telling this seemed like a perfect opportunity to give him a year of expository writing.

CWP graciously offered us access to their Cloud lessons in exchange for an honest review of our opinion on their programme. Now, if you’ve been reading my reviews for a while, you know that I don’t often exchange reviews for products because I’m often scared that I might not like something, that we will change our minds, or that our schedules will go awry. This was such a blessing for our family, we did accept the offer, and I have to say I’m so grateful for CWP‘s patience in me with getting this review written and published because life certainly went awry for us last year!

How We Use Byline Video Writing Program:

When our lovely package of goodies arrived in the mail, the first thing we did was a quick package check. Our Teacher Book was missing, and after verifying there should have been a physical book I contacted the company who was very quick and kind about rectifying the problem for us. This was huge to me, because we know that international shipping is NOT cheap. Many companies will offer us a digital book or the refunds of the money instead of the missing item, so to have a company offer such amazing customer service and send an additional package with the missing item was amazing! 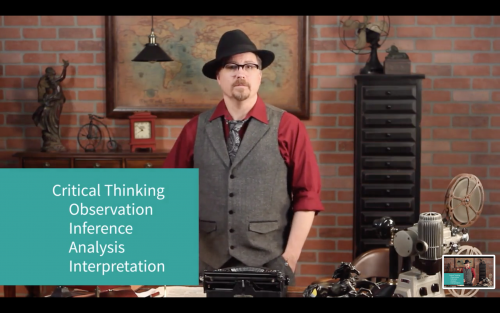 I watched the teacher videos first to be sure we knew what we were doing, and then had a quick chat with Morgan about how and when he’d go about tackling the programme. In the end he decided to work on it Tuesdays – Fridays. While he only worked on 3 lessons per week the fourth day allowed him extra research time, finishing off or polishing up writing pieces. By not using it on Monday it allowed him to feel less rushed when he did tackle writing as he had science lectures on Mondays.

Aside from asking if he’d done writing, I was reasonably hands off with this programme as it is truely written FOR the student! My boy would pull up the video that went with his lesson, and I admit sometimes we had to close the door to our home library because his chuckles and snorts were distracting the younger student from math lessons. 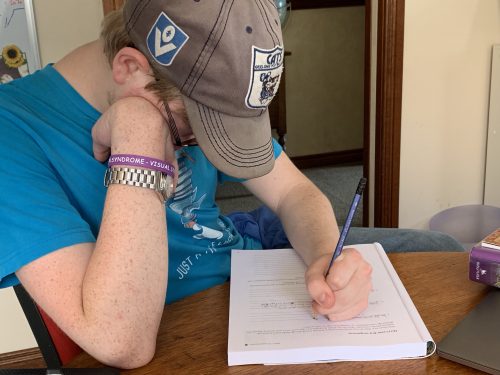 We did have a small dilemma where Morgan wondered why I wasn’t correcting his writing. So I explained to him exactly what Mr Schwabauer had told the teachers. Which summarised goes a little like this, “Over correcting squashes creativity and leaves you feeling like someone is constantly looking over your shoulder.” Goodness me, my kids hear me complain about the “writing monster” who sits on my shoulder all the time waiting to poke holes in my work, and I adored that this was mentioned form the get-go.

I did check in with my son at the end of each week to be sure the work was being tackled. If he had times when he was jammed he would come to me to ask for clarification of help, and we’d work through things together, but over all this was a very student led programme.

What We Loved About Byline Video Writing Program:

Video lectures: This was one of the biggest reasons we sought to use Byline. With my son’s Irlen he needs video or audio based lessons in order to work solo, and Byline allowed him that independence without always feeling frustrated with waiting on Mom. 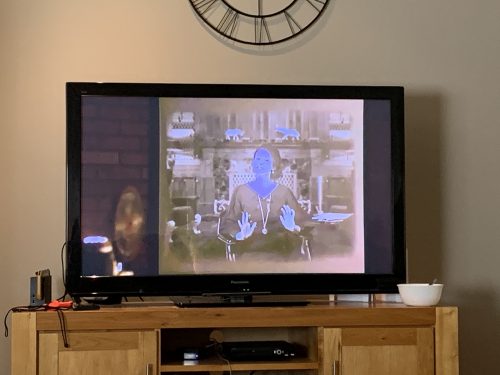 Cloud Features: Now, I’m not going to lie, I’m normally opposed to subscription based, or online based, programmes for the mere fact that eventually your time with them runs out and you have to renew. BUT, my son uses an iPad not a computer, and it didn’t have a disc drive. He also has access to an computers that no longer have cd-rom drives in them. He loved that he didn’t have to worry about finding the portable disc drive or locating the disc, but could just bring up the lecture on a computer and be off and running! When we joined him for the videos he just airplayed it to the tv.

The Notebook: If you knew my son well you’d know he’s rarely without pencil and paper. Admittedly it’s usually to draw on or to take random notes about one thing or another. The small sized journalist notebook that came with this programme was fantastic. He could slip it in a pocket or throw it in his satchel and be off with it. In fact, when his younger brother gave him a new satchel for Christmas the first thing he did was check to see if the interior pocket was “just the right size” for his notebook! 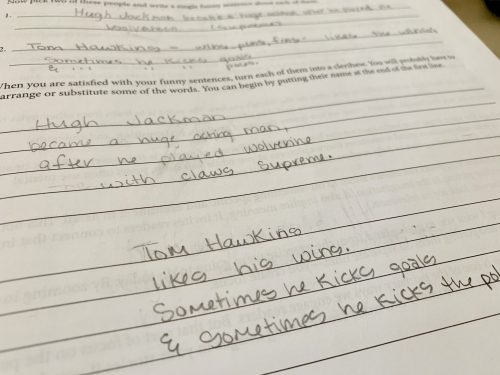 Written To The Student: So many writing programmes use obnoxiously big words to mean relatively simple things, and if often leaves a student floundering. In fact, this is something that Mr S discusses in information to the parent. I admit, I was nodding along the whole time and even offered a virtual high-five because I knew exactly what he meant! While my student did have a few times when he got jammed, most of it was due to his own overthinking or misreading the instructions. I loved that Mr S created a programme written directly for the student!

Durability: Readers, if you knew my sons you’d understand this. I have one student who had literally destroyed the binding on a math book in 48 hours. I was shocked. I was appalled.  I still had a binding to repair. This workbook and the notebook have been tossed around the house. They’ve been found under a sleeping dog, they have been lost under the sofa, rescued from a bird that thinks eating books is all that life is about, stacked on the bookcase where they belong, bent back on itself, and aside from the drawing {yes there are a few doodles} and writing in the books, they still look new. I have no idea how this is possible or what it’s made of, but it truly has impressed me!

Customer Service: As I mentioned earlier we had a slight error with our order and the company was very fast to rectify the problem! I don’t know about you, but I find good customer service so difficult to come by lately that when a company does offer such it tends to make me cherish them even more! 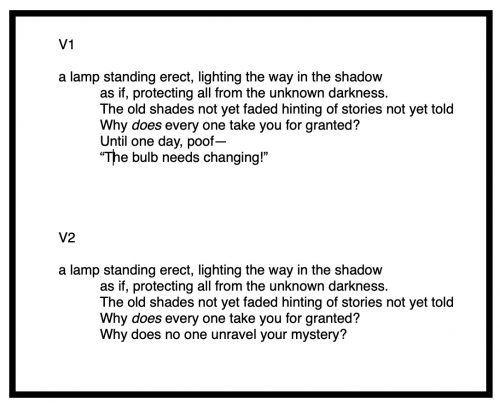 What We Didn’t Like about Byline Video Writing Program:

The Workbook: Okay, take this with a grain of salt, because as long time readers of my reviews know my boys {and I} have Irlen. My son struggled a little bit with the book when there were was text on grey background. This was NOT often, and when it did come up, he just brought the book to me to ask for help. This was an easy solution to a relatively unique and simple problem. It’s unlikely that the average user would have this problem, so I almost feel silly putting this down.

Cloud: Okay, so this is probably confusing, because I said I loved this and that my son loved this. It’s true we did, but I would be remiss if I didn’t admit that despite loving the ease of it I always feel a little grumpy when we run out of access and have to renew again. Having said that, CWP has the lowest renewal fee of any online service that we’ve ever used before! It was only $20 to renew Byline, other programme prices vary. 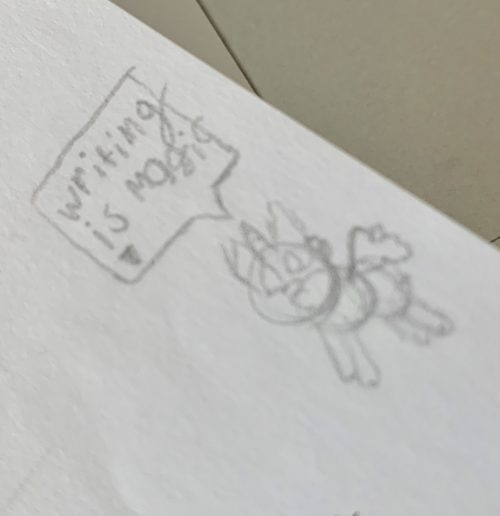 While looking through my son’s workbook recently I couldn’t help but smile at a doodle that sums up just how much he loved this programme: It was a small unicorn with a speech bubble that said, “Writing is magical!” Any programme that can make my kid declare that writing is magical is getting huge thumbs up from this Mamma. 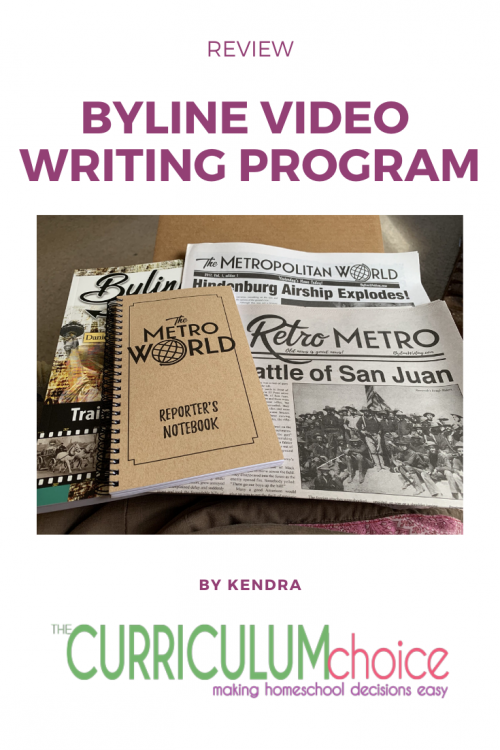