We love field trips! One place we had heard of, but hadn’t yet gotten to go to, was the Titanic Museum Attraction in Pigeon Forge, Tennessee.

This year marks the 100th anniversary of the tragic voyage the Titanic made. It seemed like the perfect learning moment to take advantage of. 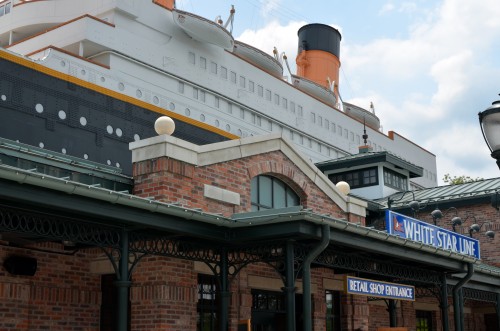 We traveled down to the attraction and were greeted with boarding passes. The crew was very friendly and helpful with our large family. We each had a listening device to get a personal “tour” in most rooms. There was a child’s version and one for the adults.

The museum was very large and very well thought out. Each room had a different purpose and area of concentration. Scattered among the rooms were personal artifacts from survivors, photos, biographies and much history.

There is no photography allowed inside the museum, so I was thankful I had a pen and some post-its. I took quite a few notes about things that I wanted to remember and things I wanted to come home and learn more about.

My boarding pass was Elizabeth Nye. I was supposed to find out more about Elizabeth at the end of the tour but with the crowd we chose not to stay and try to find out her fate, or the fate of the rest of our cards. We should have stayed and asked for the story of each person. I would love to hear the staff tell it. 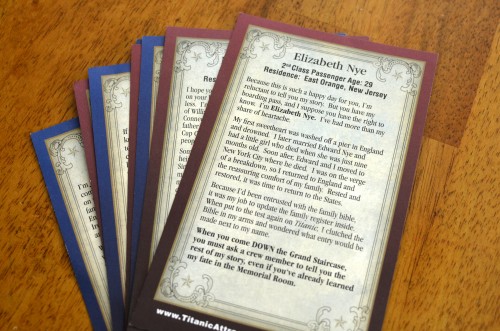 I have since learned the fate of my pass but will not share in case you get her card when you go. I would still love to hear her story!

The tour was an easy one. There was plenty to see and explore and the tour was friendly for children as well as those who are of all ages. There was great access for those with handicap needs.

One of the highlights was standing in the Grand Staircase. There is a bit of a surprise with some of the ornate details! 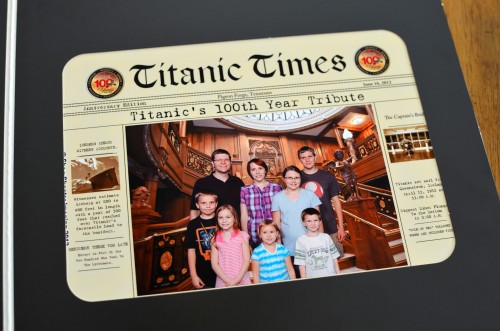 If you plan to go, expect to spend several hours. There is so much to look at, to read, and to discover.

A few facts I didn’t know, but picked up along the way:

The reactions of my children at dinner when the tour was over:

As for me, I agree with my husband. Once you move “outside” and have a chance to experience with your own body, just a portion of what the people on board the Titanic had to go through, the whole experience was heightened.

There was so much history and so much to learn. But once you stopped and put yourself in the position of the passenger – a real person with a real family – the whole thing was overwhelming.

No television special or Hollywood movie can come close to what this museum offers. The ability to see pieces of the lives that were either spared or lost that fateful night was a humbling experience and I am so glad we were able to share it.

There are two locations for your family to visit this wonderful attraction: Branson, Missouri and Pigeon Forge, Tennessee. Pricing is as follows for the Pigeon Forge location:

There is no photography allowed inside, but you may take photos outside.

If you have the ability to go, I urge you to do so. This is the best thing, other than the view of the mountains, that Pigeon Forge has to offer. You won’t want to miss it!

Disclaimer: I was provided complimentary tickets as part of the Titanic Museum Attraction’s Mommy Blogger program. I received no other compensation, nor was I required to write a positive review. All opinions are my own.

Samantha is a Christian homeschooling mom of six, married to Rick, her high school sweetheart. Rick was called to be a preacher, Samantha was called to homeschool, and loves blogging about their journey. She is interested in Bible study, photography, exercise, organizing, and sweet tea. You can find Samantha blogging at Sam’s Noggin.

Sam is a Christian homeschooling mom of six, married to Rick, her high school sweetheart. Rick was called to be a preacher, Sam was called to homeschool, and loves blogging about their journey. Her family leans on the Charlotte Mason, literature-based side of eclectic home education. Sam is interested in Bible study, photography, exercise, organizing, and sweet tea. You can find her blogging over at Sam’s Noggin.