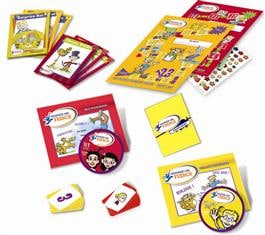 Having taken French in high school and college, I couldn’t help but want to work on French with my children once we started homeschooling.  Urged by many people to focus on Spanish instead, we spent a gross amount of money, bought Rosetta Stone, and started working on Spanish.

After six months, when my kids only seemed to be able to use about as much Spanish as they had learned on Dora (apparently the program just didn’t mesh well with us), I decided that we were going to start on French instead.  I was thrilled to find a great price on Hooked on Phonics’ French program called Hooked on French.

Would I Recommend It to a Friend?

I would definitely recommend it to a friend whose children were not older than mine.  (Mine range from kindergarten to 5th grade.)  It is definitely for younger kids, but it is a fabulous price and really works on the basics.  It is a fun introduction to a foreign language.

Angie can be found writing on her blog, Many Little Blessings, about faith, family, and household management.  She is also the founder of The Homeschool Classroom and Catholic Mothers Online.

Angie, a domestically-challenged artist and writer, is a homeschooling mom to three children. She writes about everything that happens in their lives between all the loads of laundry at Many Little Blessings. She is also the founder of The Homeschool Classroom, Catholic Mothers Online, Tiny Owl Designs, and Just a Tiny Owl {Etsy shop}.